Home › Multimedia › PODCAST. Drug-drug interactions: Implications for anticoagulation use in patients with cancer 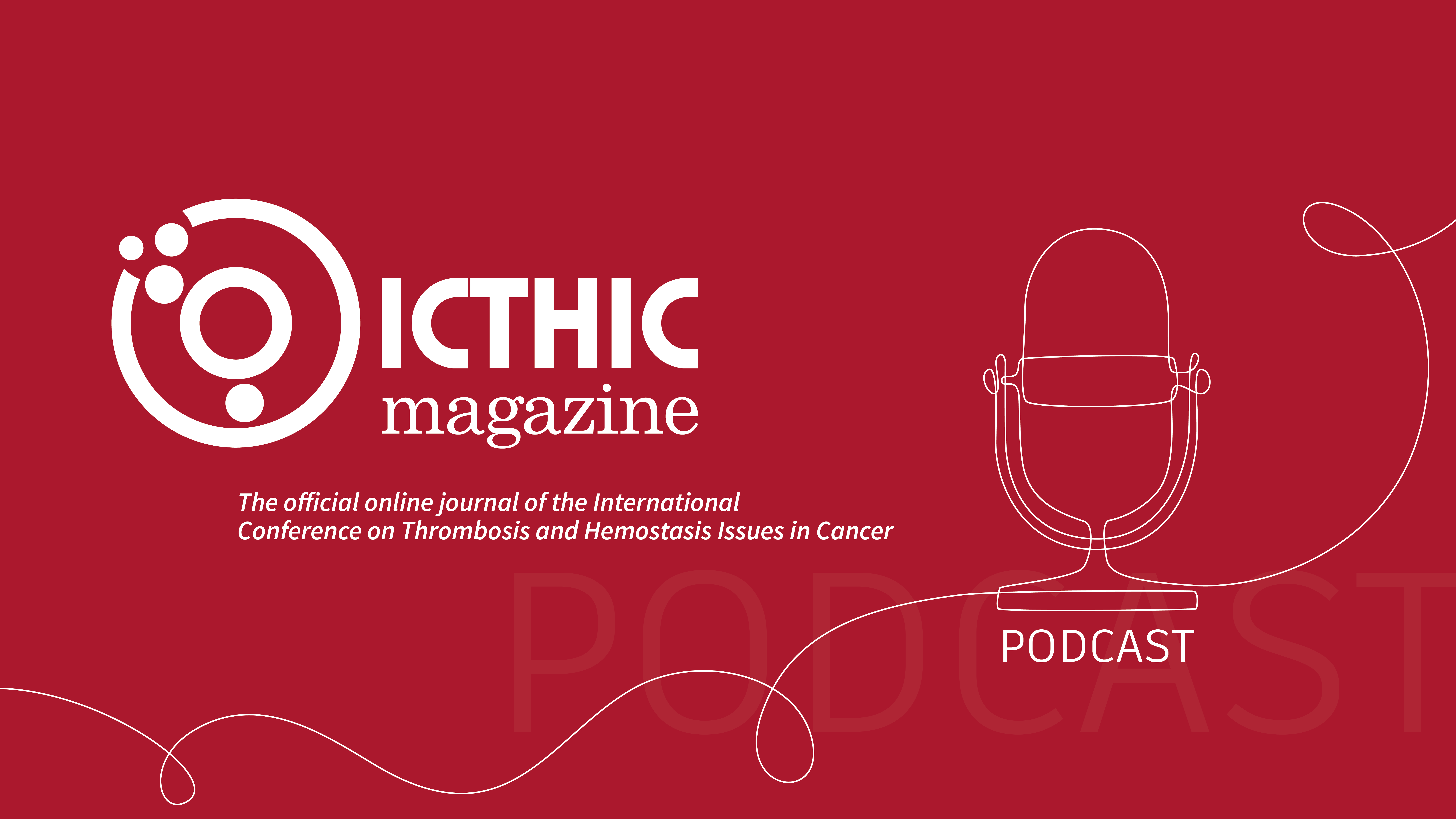 Drug-drug interaction is important because it accounts for 20 to 30% of adverse drug reactions. Patients with cancer often have an increased risk of drug-drug interaction because they are usually older and have multiple comorbidities; they can also have reduced liver and kidney function that can cause a change in the metabolism of the drugs and commonly take multiple medications.

In this podcast, Tzu-Fei Wang will talk about drug-drug interaction and its implications for cancer patients.

Summary podcast. Drug-drug interactions: Implications for anticoagulation use in patients with cancer

Full podcast. Drug-drug interactions: Implications for anticoagulation use in patients with cancer

My name is Tzu-Fei Wang; I am a hematologist at the Ottawa Hospital at the University of Ottawa in Ottawa, Canada.

Today I have the pleasure of speaking to you about the topic of drug-drug interaction, particularly its implications for cancer patients.

In the next 10 minutes or so, I would like to summarize the scope of the problem and discuss some pertinent literature and future research directions.

We all know that cancer patients have an increased risk of VTE by at least 12-fold. And cancer therapy will further increase the risk of VTE by a further 23-fold based on a large recent Netherlands epidemiology study.

In addition, cancer patients also have at least a 2-fold increased risk of atrial fibrillation. Therefore, anticoagulation is commonly used in cancer patients, and historically low-molecular-weight heparin (LMWH) is the anticoagulant of choice.

Although warfarin remains commonly used given its cheap price. In recent years, based on multiple randomized control trials, direct-oral anticoagulants (DOACs) increased in their use.

And patients with cancer often have an increased risk of drug-drug interaction because they are usually older and have multiple comorbidities, and can have reduced liver and kidney function that can cause a change in the metabolism of the drugs.

And they also commonly take multiple medications, including cancer therapy or supportive treatment for their cancer, as well as other medications for their comorbidities.

And studies thus show that with an increasing number of concurrent medications, the risk of drug-drug interaction significantly increases.

However, even though drug-drug interaction with anticoagulants can be common, current literature is quite limited either to the case series or retrospective studies, and, in the end, a lot of guidelines and probably labeling are mainly based on in vitro pharmacokinetic studies and/or expert opinions.

And because of that, these guidelines and labeling could be nonspecific and sometimes could even have conflicting recommendations.

So, a lot of times, we really don’t know whether the in vitro pharmacokinetic studies can have direct implications on clinical pertinence and clinical outcomes, which is where certainly further research is needed.

So as an example, in the United States, the FDA recommends that in the presence of strong dual inhibitors, apixaban should be reduced in dose to 2.5mg twice daily, while Health Canada and EMA from Europe actually recommend against the concurring use of apixaban and strong dual inhibitors P-gp inducers. So, you can see that there is conflicting labeling that could be confusing for clinical practice.

So first, we discuss pharmacokinetic interactions. Pharmacokinetics interactions happen when two or more drugs have a shared metabolism pathway, which causes alterations in drug absorption, distribution, metabolism, or excretion.

Classically, LMWH has not been found to have major interaction because LMWH does not go through the cytochrome p450 or MAPK14 pathway as compared to Warfarin and DOACs, which are through those pathways that are the main concern for pharmacokinetic interactions.

Particularly for DOACs, as we don’t usually adjust the dose based on certain levels (such as INR for warfarin) and we use a fixed dose of DOACs for everybody, there have been concerns from pharmacokinetic interactions, which is also the main focus of the drug labeling and guidelines.

So, the consideration is if a patient were to be on a concurrent CYP or PGP inhibitors, there were increased DOACs concentration, theoretically causing an increased risk of bleeding.

On the contrary, if a patient were to be on concurrent CYP or PGP inducers, they could reduce the risk of the concentration of DOACs, causing an increased risk of thrombosis.

So, the classic example of CYP and PGP inhibitors, namely the fungal medications ASO (antisense oligonucleotide), or concurrent therapy of that, while the classic inducers are anti-epileptic medications, such as phenytoin or carbamazepine.

There are some prostate cancer medications, such as enzalutamide and apalutamide, that are also thought to be strong inducers and could be associated with an increased risk of thrombosis.

However, as we alluded to prior, the clinical implication in clinical data is quite limited.

The Caravaggio trial, which is a large, randomized control trial, randomized patients to apixaban versus deltaparin in cancer patients with cancer-related thrombosis.

What they found is there’s no difference in the risk of recurrent VTE or major bleeding events in those patients who received any cancer therapy vs. no anti-cancer therapy.

So even though overall there seems to be no concern of risk for VTE, I think we still don’t know particularly in each particular combination or particularly anti-cancer drugs.

So, the second drug-drug interaction we should consider is pharmacodynamics interaction which happens when the presence of one drug enhances the drug effect of the other drugs.

The classic example is the concurrent use of anticoagulants in antiplatelet therapy. And a lot of times, there are some other anti-cancer therapies that we should pay attention to, such as BTK inhibitors (Bruton Tyrosine Kinase inhibitors) which are mainly used in lymphoma in CLL patients that are known to have an off-target antiplatelet effect. Anand concurrency therapy in anticoagulation can increase the risk of bleeding.

So. these are based on a few retrospective studies that have been highlighted in the complementary manuscript in our most recent 11th ICHTIC that just happened in 2022, that’s published in thrombosis research that I will encourage you to refer to if interested.

So we also recently published the TacDOAC study to evaluate the safety in the efficacy of concurrent use of DOACs and targeted therapies that is published in JTH in 2021.

We included 202 patients from six international sites of patients with active cancer who are taking concurrent DOACs and a selective list of anti-cancer therapy.

What we found is there’s an overall wild risk of major bleeding. At six months is 4%.

That’s pretty comparable to the contemporary DOACs trials; there’s a significant variation in different combinations with different anti-cancer therapy with BTK inhibitor presented with a very high risk of major bleeding at 10% in six months (closely followed by VEGF inhibitor at 7% in six months).

So, I would suggest that further studies are needed to evaluate what is the relevant drug combination that will cause drug-drug interactions that we should be concerned about.

And, in particular, what are the relevant clinical outcomes, such as bleeding and thrombosis, to further help us develop optimal monitoring management strategies.

And to refer to your product monograph package inserts and consult your local pharmacist as well.

Thank you for your attention. Feel free to contact me with questions.