Home › Thrombosis and cancer › Focus on: Pediatrics › An update on the status of direct oral anticoagulants in children

Once considered a condition of adults or the elderly, venous thromboembolism (VTE) is now being recognized in epidemic proportions in children, particularly in the setting of tertiary/quaternary paediatric health centres[1]. In contrast to adults, in whom around forty percent of thrombotic events are idiopathic, VTE in children is usually multifactorial, occurring in the setting of catastrophic conditions (e.g., cancer, congenital heart defects) or due to instances of high clinical acuity[2] (e.g., surgery, sepsis). Notably, such events are usually associated to a central venous catheter (CVC), particularly in neonates and infants[3]. Ultimately, this surge of VTE in children results from three factors:

a) the increased rate of medical intervention applied in the care of severely ill patients;
b) improvement of diagnostic methods; and
c) the raised awareness of the disease amongst paediatric treaters.

The treatment of VTE in paediatric patients is further complicated by their developing haemostatic system particularly in the first year of life, when coagulation zymogens express qualitative and quantitative differences in relation to their adult forms. Developing haemostasis affects the predictability of the pharmacokinetic (PK)/pharmacodynamic (PD) properties of AC, thus negatively impacting the generalizability of recommendations derived from adult studies[5]. In addition, the need for frequent laboratory monitoring, parenteral administration (i.e., heparinoids), absence of paediatric formulations, and the OVKA-diet interactions that occur throughout childhood likely hinder the use of AC in this patient population.

Until recently, paediatric investigators focused their efforts on closing the knowledge gap on how to better use classic AC in children[6]. In contrast, a growing amount of clinical data were accumulated on the use of a new class of anticoagulants named direct oral anticoagulants (DOACs) in adults. These compounds are now approved by regulatory agencies (e.g., U.S. Food and Drug Administration [FDA], European Medicines Agency [EMA]) for several indications in the treatment and prevention of thrombotic events in adults, including VTE[7,8].

DOACs have several potential advantages in relation to classic AC, suggesting that they could be very suitable for use in children. Particularly appealing characteristics include their oral administration, a shorter list of drug-drug and drug-diet interactions, a wider therapeutic window, and the lack of need for routine laboratory monitoring. Moreover, their mechanism of action does not require the interaction with other circulating coagulation proteins whose levels vary due to developmental haemostasis (i.e., interaction of heparinoids with antithrombin), likely resulting in more predictable PK. Therefore, it was only natural that paediatric treaters would envision that the adoption of DOACs could overcome some of the shortcomings associated with the use of the classic AC in children.

This review will briefly summarize the knowledge accumulated on the topic of DOACs in children to date, detailing the ongoing paediatric trials.

The development of drugs in children must comply with certain regulatory items originally developed to promote high-quality and ethical research in this patient population despite the lower economic potential of these drugs[9,10]. As a result, the study of DOACs in children follows a formal investigational structure delineated by paediatric investigation plans (PIP), which are submitted to the respective regulatory agencies by the pharmaceutic companies for the approval of their compounds. The items included in the PIPs of DOACs in children encompass:

Recommendations for the investigation of DOACs in children have also been recently delineated by the paediatric and neonatal subcommittee of the International Society on Thrombosis and Haemostasis (ISTH), with a strong suggestion for post-licensure surveillance[12]. 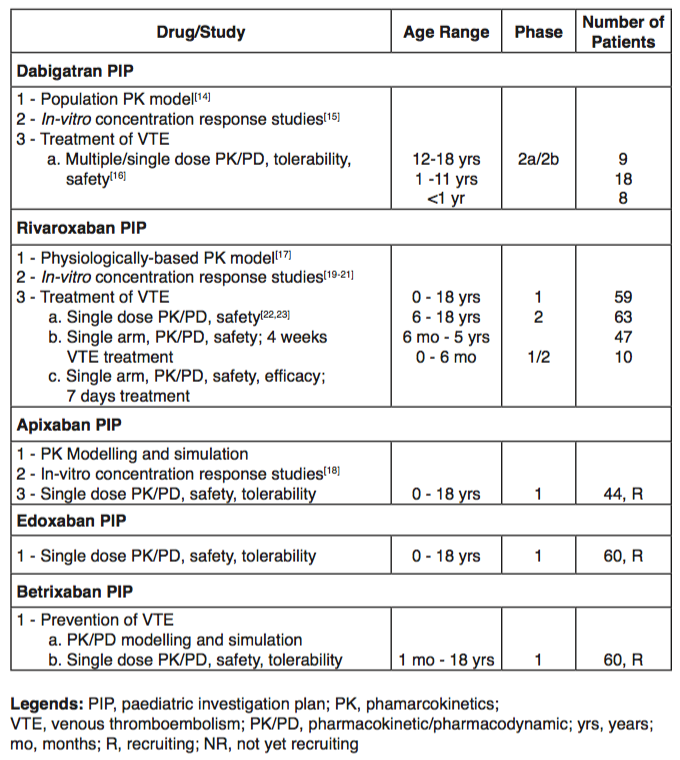 To date, rivaroxaban and dabigatran are the agents with the most data available. For the former, a PBPK/PD model for children revealed an increased dosing requirement for children with less than 40 kg of body weight (Table 1). Additional ongoing studies are expected to be presented in the upcoming ISTH meeting in the summer of 2019.

With regard to treatment of acute VTE, all the paediatric phase 3 studies follow a similar study design, in that the respective age-appropriate dosing calculated by the phase 1-2 PBPK or pop-PK studies are tested. Of note, recruitment in these trials occurs in a staggered manner, starting with initial enrollment of older patients (i.e., 12-18 years of age). The phase 3 studies all randomize patients comparing standard-of-care AC and DOACs. To date, only one agent, dabigatran, has initiated recruitment of patients for secondary prophylaxis (Table 2). Conversely, there are a few studies recruiting children for primary prophylaxis, including the prevention of central venous line-related VTE in children with leukaemia and the prevention of thrombotic events in children with congenital or acquired heart disorders (Table 2).

Summary of trial designs and outcomes (according to DOACs):

Despite the perceived safer profile of DOACs identified by studies conducted in adults, there is still a need to optimize the safety of children participating in these trials. Therefore, the investigation of the two specific reversing agents approved by the FDA, namely idarucizumab for the reversal of dabigatran and andexanet alpha for the reversal of direct factor Xa inhibitors, are mandatory in children. A study to evaluate the effectiveness of idarucizumab in children has already been opened, whereas an agreement to investigate the PK/PD of andexanet alpha in paediatric patients has been agreed upon (not yet recruiting).

In conclusion, several PIPs have been initiated to evaluate the role of DOACs in the paediatric population. It is likely that only studies performed on a global scale will allow recruitment of patients without jeopardizing the feasibility of all studies, given that they compete for enrolment. Furthermore, it is conceivable that distinct findings may occur in the paediatric population due to the different nature of thrombotic events in relation to adults. For example, the RE-ALIGN trial revealed inferiority of dabigatran to prevent thrombosis in adults with mechanical heart valves and it will be vital to evaluate if DOACs can still be used to prevent CVL-related VTE, given that it is the most common VTE risk factor in children. Therefore, the paediatric community should focus on gathering forces to offer DOACs only to trial participants, facilitating the successful conduction of such trials that will culminate in their licensure in the next few years.